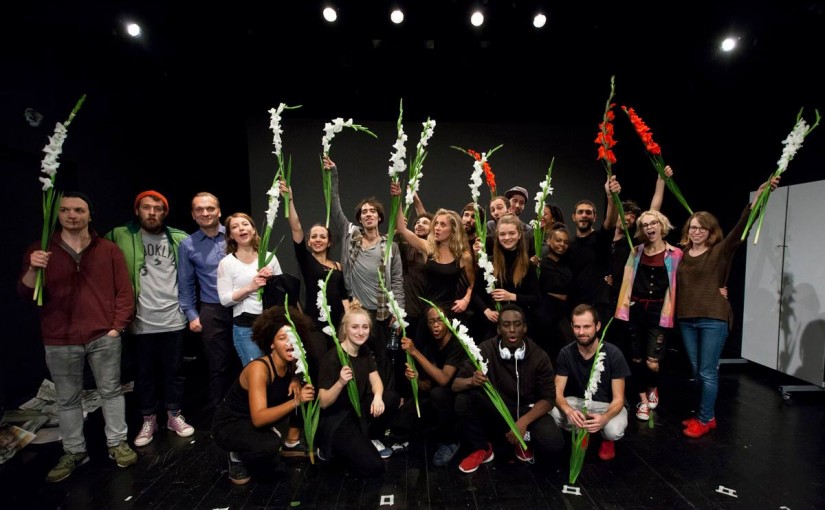 The first days of the project were characterized by a constant research on the alchemy of emotions, concept evaluation and a steady expressive follow up. The whole group was introduced to an improvisation per task system and forced to get deeper involvement into topic. Later their took what was created during first days of the project and constructed that into main performance, which became a puzzle of all of the participants experiences, emotions, wishes and fears.

Performance day was very exciting to each and for all at the same time. Finally they’ve had to show what was created during this short, but extremely productive period.  And it went just magically. This small and cozy theater was full, people where clapping and natural discussion on the racism and discrimination topic started. So it can be said, that they really made an impact. 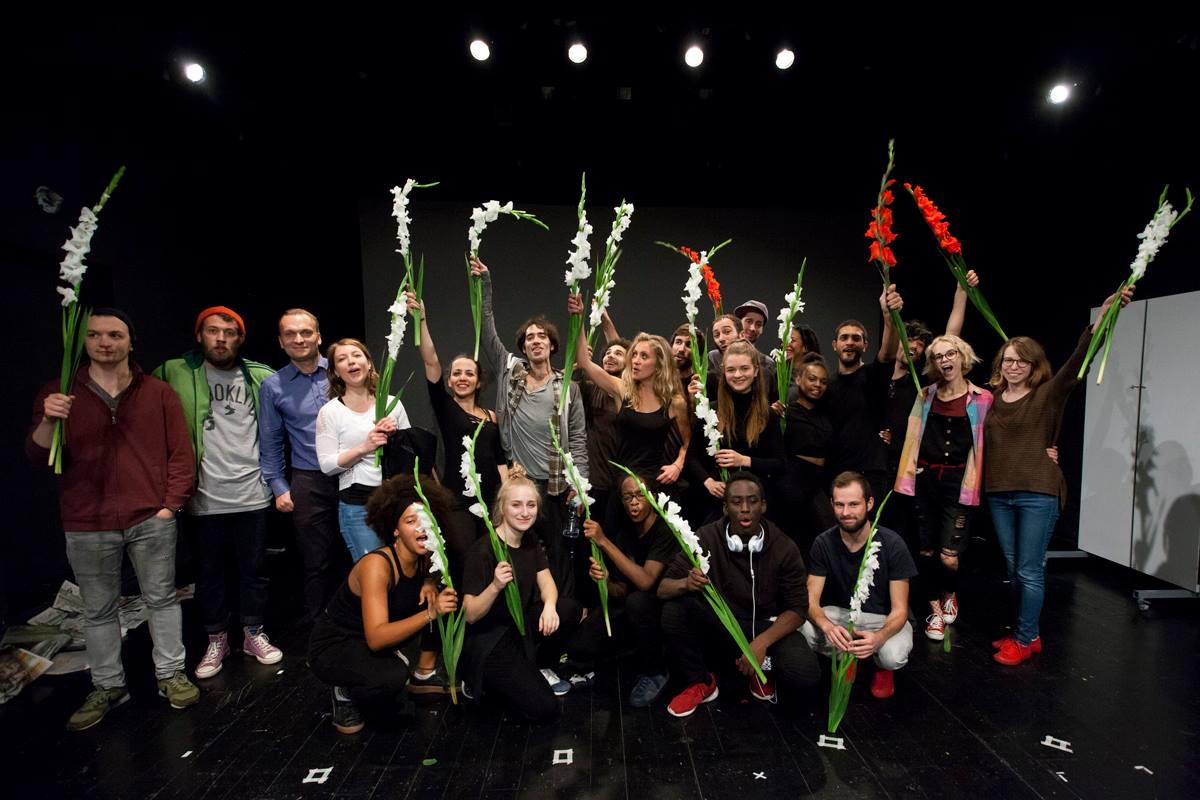 And finally, after intense period, time for reflection and relaxation came. So for the last day all this artistic bunch packed their backpacks, said good bye to Kaunas and went to explore Lithuania capital – Vilnius. It was time for side seeing, talking, planning future meetings, hugging, drinking coffee in the Lithuanian autumn sun and just reflecting about time spent in the camp. 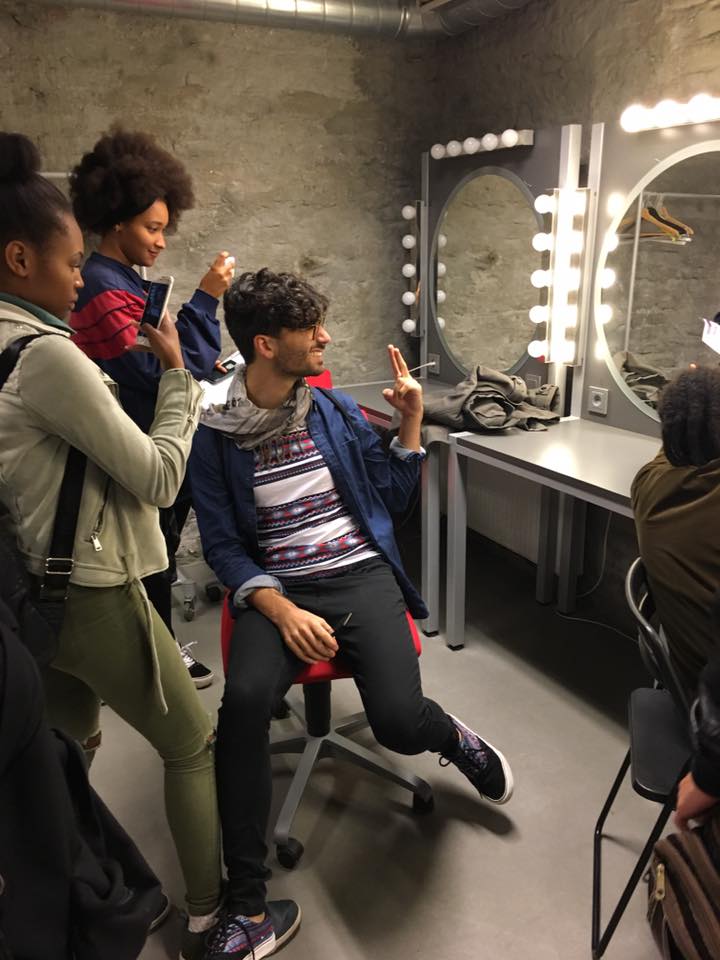 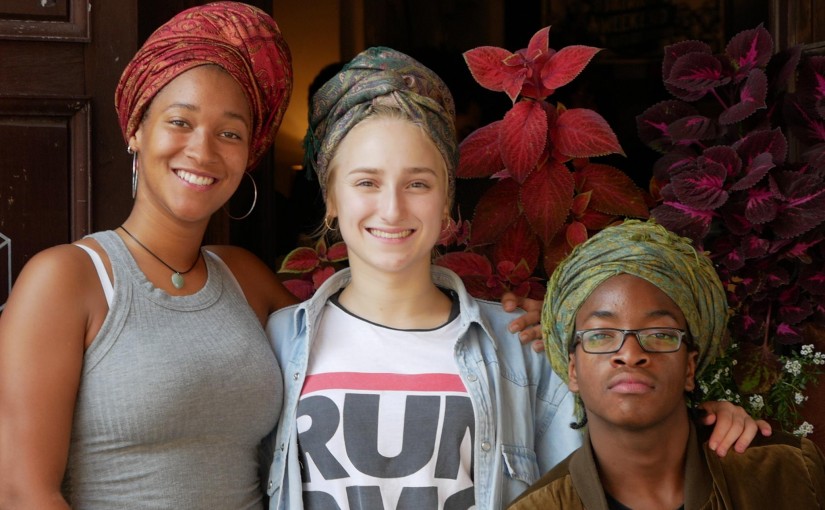 Moving on the ledge of actuarial performance, two interventions were carried out by racism theory experts. A deep connection between spoken word and racism was bridged. Jan first, and Jurate in a following session, took flight over the conceptual world of racism landing on the importance of art as social device to contrast the hatred. The group followed carefully as Jan gave anecdotes about his personal experience with discrimination. A couple days later they where involved in a role-playing afternoon introduced by Jurate that made them rethink their lives in the cloth of a fictitious character and what comes of it of change in their points of view.

General coach Gildas also asked them to look for a news articles that resembled their inner experience about discrimination and racism, helping to bring out their inner critical spirit. In change they were to give him a piece of work sprouting from those emotions that they had kept inside of them for a long time. The results were wrote down, designed and followed up by daily work in light of what they had learned in the precedent days.

At the same time one of the coaches – Aistis, invited all participants to divide into groups, spread in the city and make a short video interviews with the locals. Asking them some really confronting questions such as “Are you a racist?”, that made all participants to step from their comfort zone, also it helped them  get into local people minds and hear their thoughts about this uncomfortable topic. 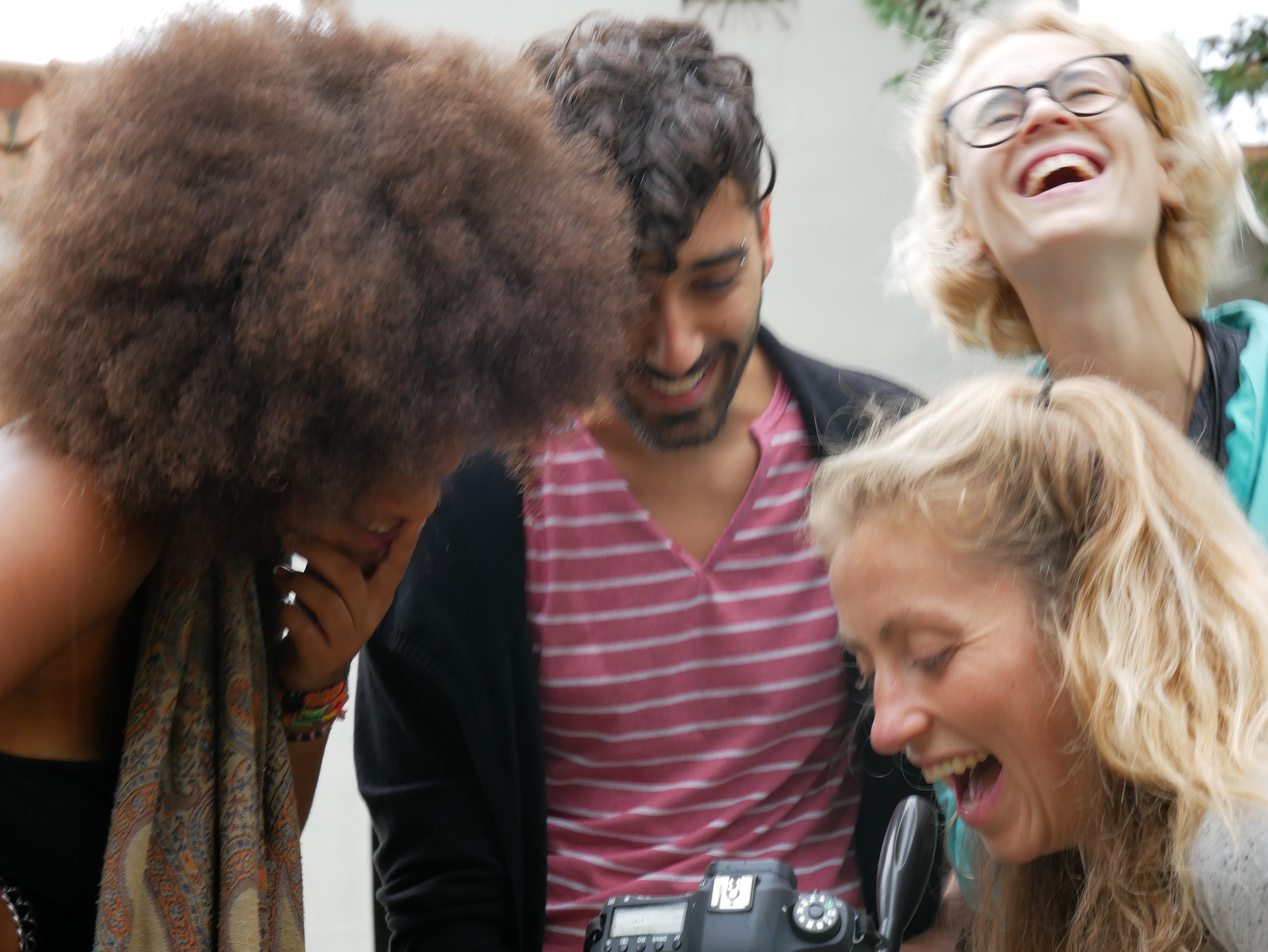 And finally there was Laura. The girl with the camera, who was responsible for media part of all this project. Together with her, those people, who already had some insight view what racism is and what locals think about it, created short video teaser about the projects, about the upcoming performance, about the racism and about foreigners in Kaunas landscape. 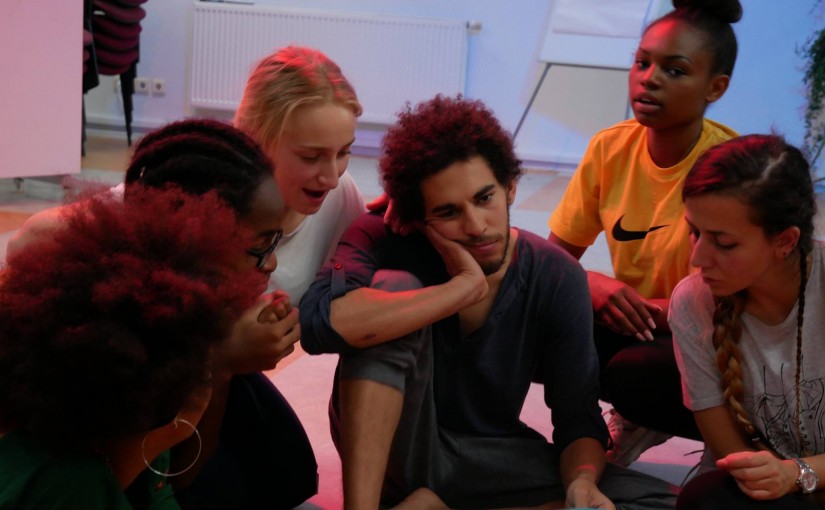 The first morning schedule began as early as 10 AM. Everybody was given a brief glimpse of the project, camp and the disciplines/work  that would have animated the upcoming days.
The second half of the day was devoted to one of the two anti-racism theory sessions with the intervention of Jan Bahal, a theory of anti-racism disciple, at the end of which, a discrepancy between semantic intention and semantic symbol was delved out of ambiguity in the context of the racist vocabulary.

They were left no more idle hence, instead they were involved into the active discovery of the physical measures, weights, smells and the sounds that the spaces of the “Kaunas Cultural Centre of Various Nations“ presented to them. By night a jam session was also in plan where the group had a fist impact acquaintance. And that was just the first day. Afterwards hard but inspiring work followed. Young talents worked and spent together long hours just to share their experiences and skills, crystallize ideas and built this performance that would transfer this project idea to local community and make an actual impact to them. 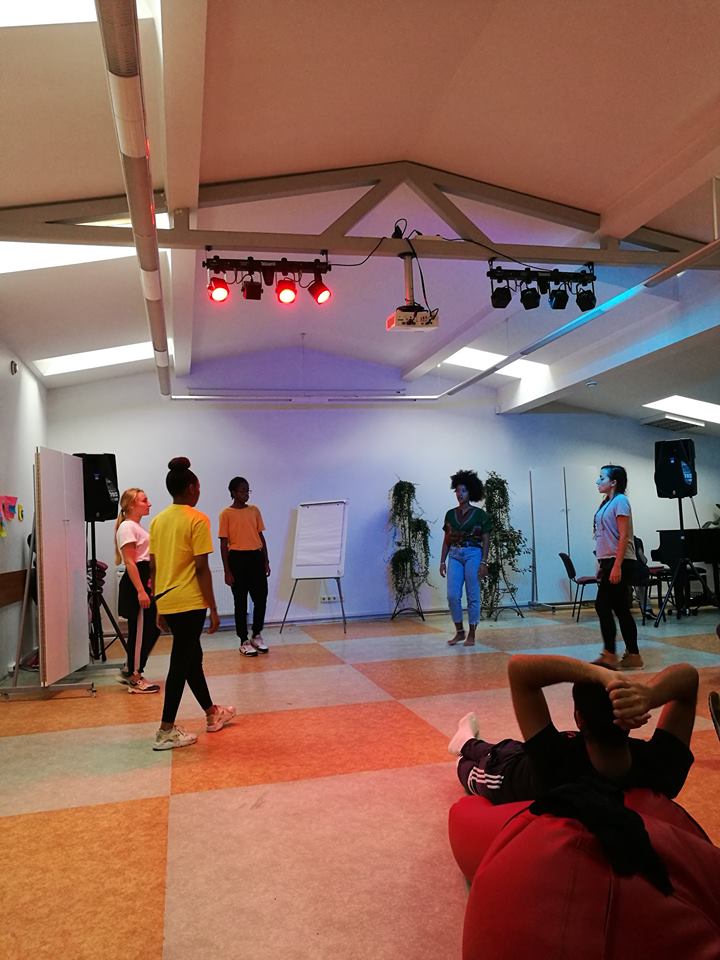 Improvisation, lack of time, bold contraptions of imagination were only some of the challenges propedeutically thrown upon the senses, the minds and the reflexes of the newborn group in a way that its members, constantly provoked to hear and recollect into their thoughts, were faced with an emerging perception of the surroundings and of their own proprioception, devised to compose a working performative formula and subsequently asked to stage its result. 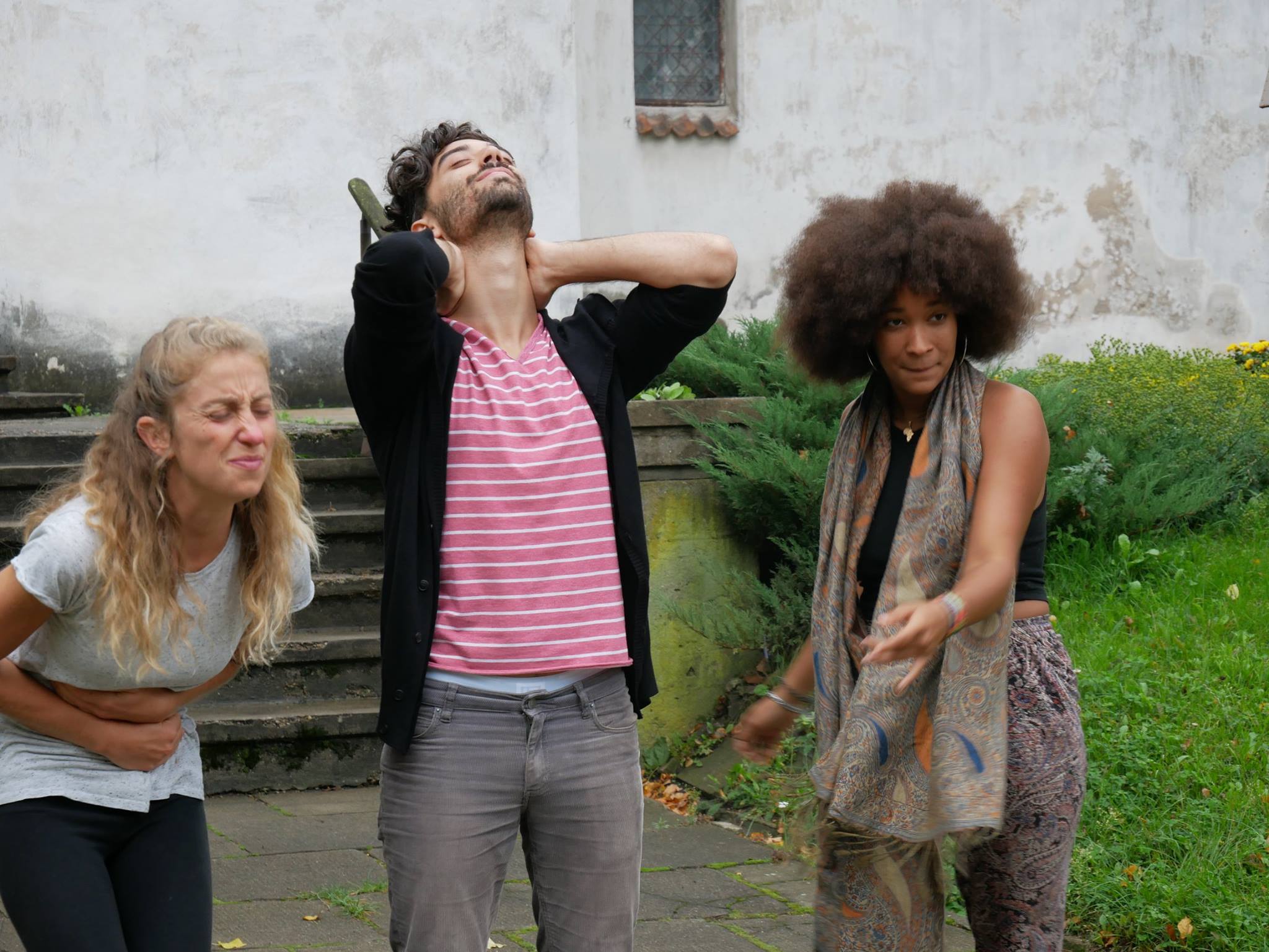 Susanna led the physical awakening, minding every little and big part of the body, in a quest for the natural emergence of the movement in strict correlation with the most enshadowed emotional globes, while Max played, between the other instruments, a piano, a guitar and his own body clapping, scratching, squeezing and touching their surfaces in the most various way in attempt to peek a little light hole through the individual emotion connecting it to its performative expression. 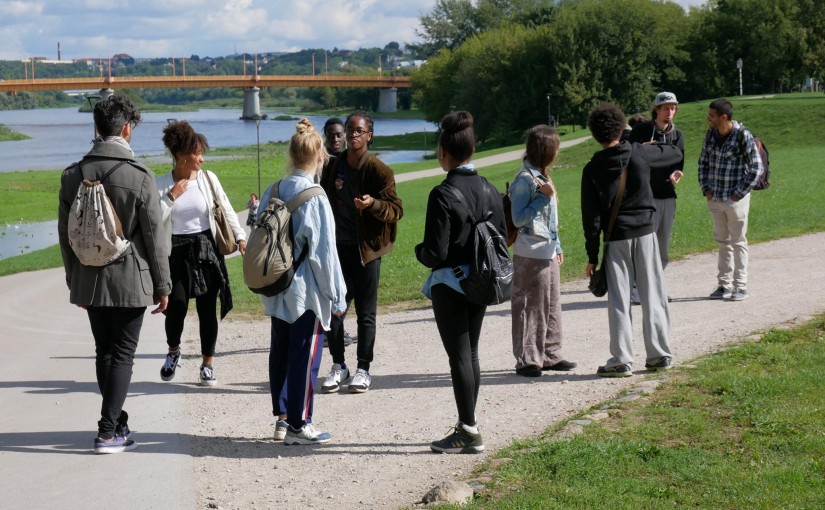 Seventh of September, full moon night. Eight variegated Italian young artists meet at a quite bus stop in the center of Florence.  Seventh of September, eight lively young artists more, after leaving their hometown, Cologne, reach them in Kaunas, Lithuania, where local young artists greats them all.  It is the starting of the third edition of the Roots’n’Routes , “I Care” project. Topic: Racism and discrimination. Performing, dancing, acting and musical composition, along with smiling and improvising were just a pinch of the creative skills involved. All this people where brought together with main task: to create a performance about this relevant topic, which will be presented to Kaunas citizens in Kaunas chamber theater.

After the respectively long trips the tired bunch were introduced to their hotel in the center of Kaunas where they carried their various backgrounds, aversions and cravings, led through the town by their brand new peer to peer coaches. Late in the following morning another long journey was in channel for them. 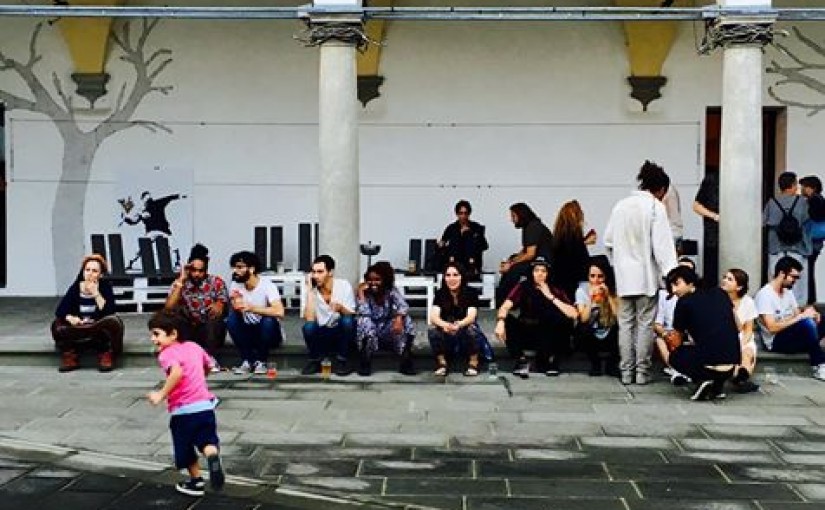 This research developed into a site-specific action that was presented on September 17th to an invited audience and to passers-by in the indoor and outdoor spaces of Exfila. We didn’t  know until the end how it would be – it was a work in progress, but the group was open to work together and the energy and interactions were strong and we were ready for the unexpected.

And it was great: a sequence of scenes in the courtyard, in various rooms and on the staircase of Exfila, starting outside the building and ending all together in a common final action, with the audience sitting all around. Everything was mainly based on improvisations, a way of creating that left us free to express in many different ways.  In this process, a temporary but solid community was created. Art became a means for encouraging empathy and change. 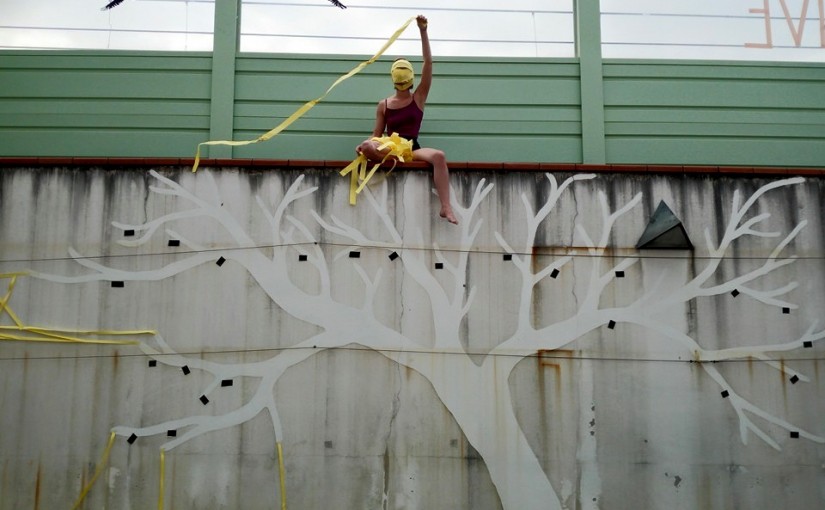 After this work in the public space with Pietro and the artistic hands-on workshop by Olga, we had a mid-term evaluation where we shared our feelings about the first camp week, and about the effects that it had on each one of us. 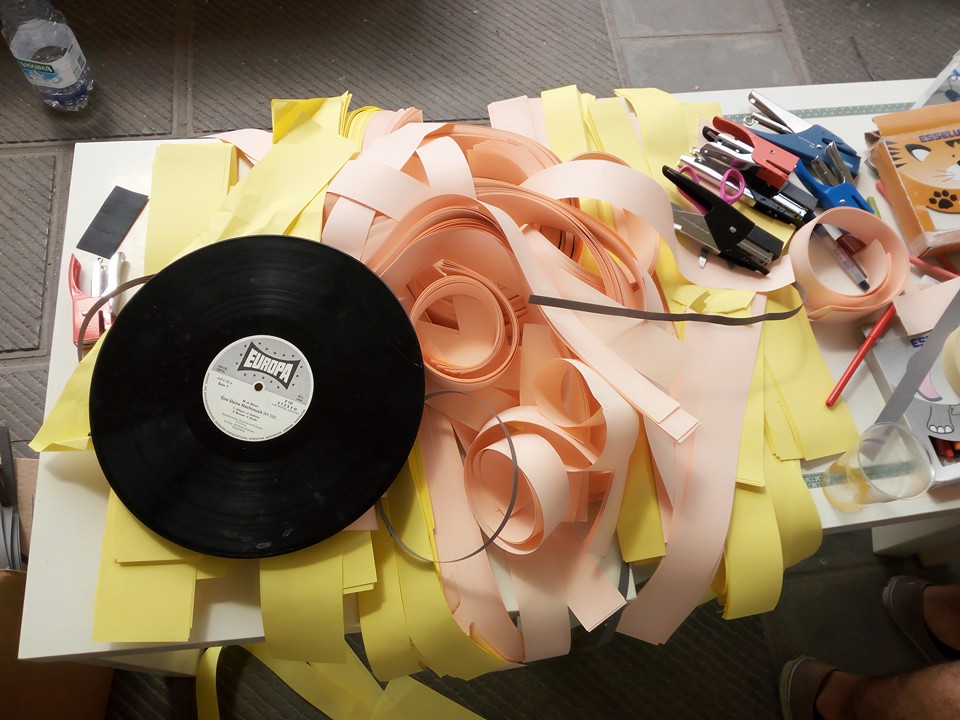 Then we started building the creative elements to be combined in a final restitution: We started using our bodies, voices, music instruments, and the space around us, in a way that was new and inspiring for most of us. 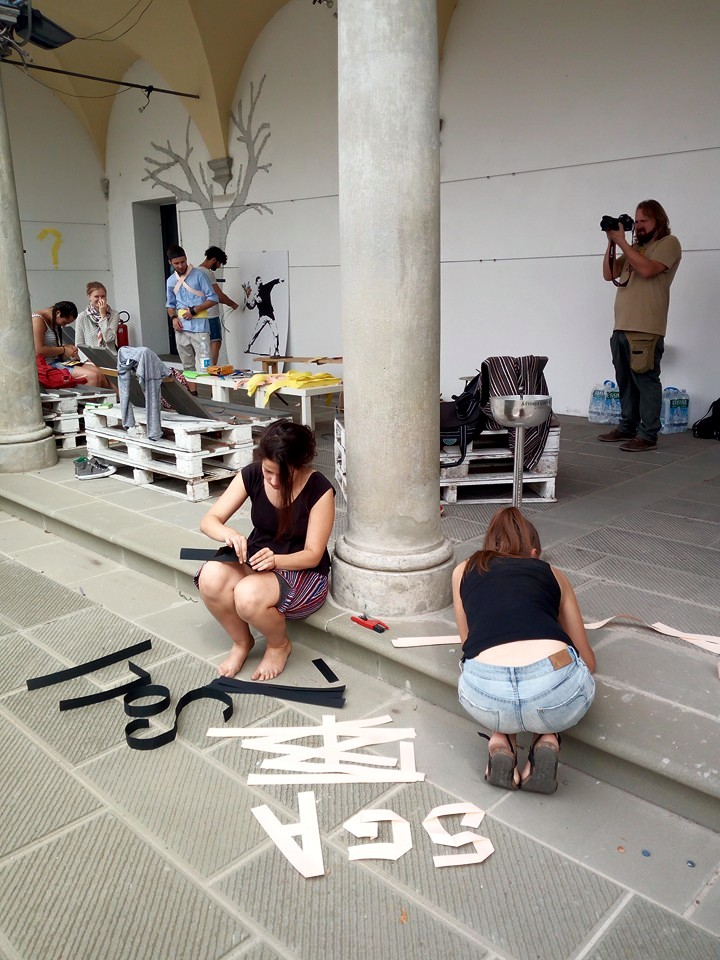 The group was divided into smaller mixed groups, and every group started exploring the spaces of Exfila and creating expressive actions on stereotypes and discrimination, in different situations that had to be related to the others. 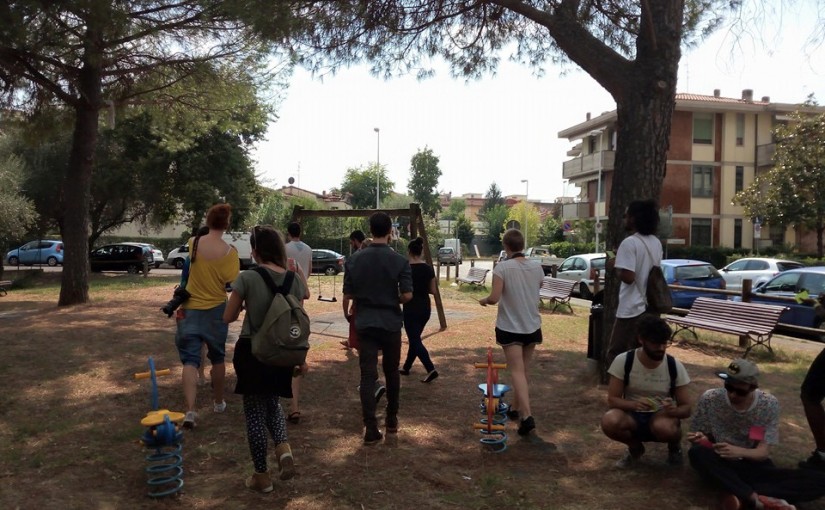 Practice and theory were interrelated: we practiced role-play, meditation and debates, but also specific dance and music workshops. Our investigations pushed to the limits the concepts of “time”, “space” and “perceptions”, in order to have a deeper understanding of ourselves and the others. During all these steps we maintained a questioning approach: How do we feel the world? What do we try to express? How can our message affect our environment? These are the kind of questions we discussed, and to which we tried to find answers.

We got to know each other and the surroundings. We created a closed facebook group to share artistic material and information about the planning of optional activities in the free time, and also as a useful follow-up tool for exchanging memories and projects after the camp. We shared the lunches and coffee breaks and chill out moments, we explored the city and went out all together. We did an urban drift with Pietro, and it was an incredible opportunity to change perspective and discover new shades of each participant. We also worked on the role of the space around us as a tool for discovering something else, for expressing our feelings and move emotions and memories that can be shared with the others. It was very important for the participants to find a way to share something personal in a different way. 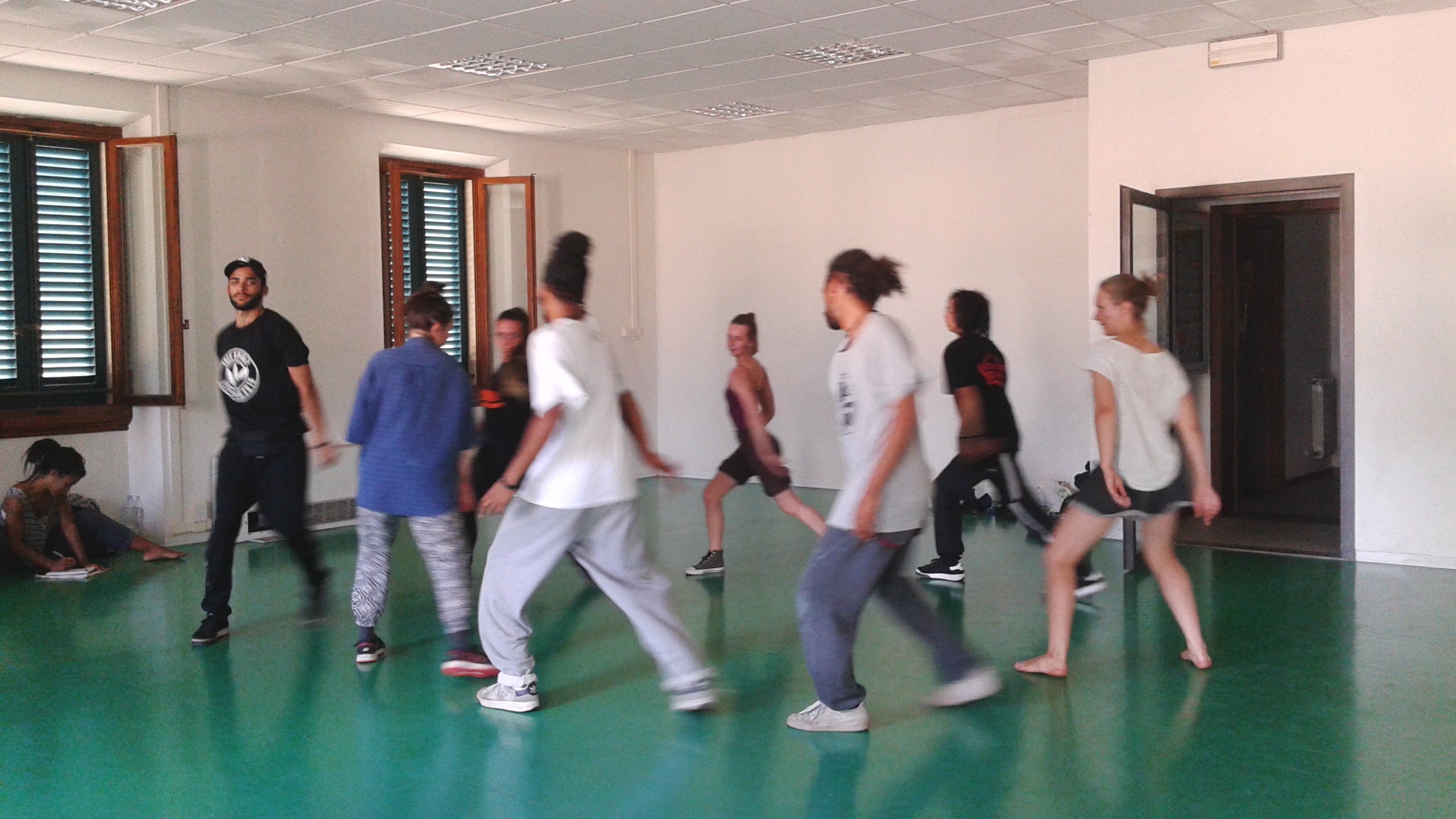 On the first days, all the participants brought part on some activities made by the coaches (music, dance, theatre), with the aim of knowing eachother and sharing ideas related to the project. It was important for us to create a group that could work together in harmony for creating something related to discrimination, having a discussion on it with the coach and participants. 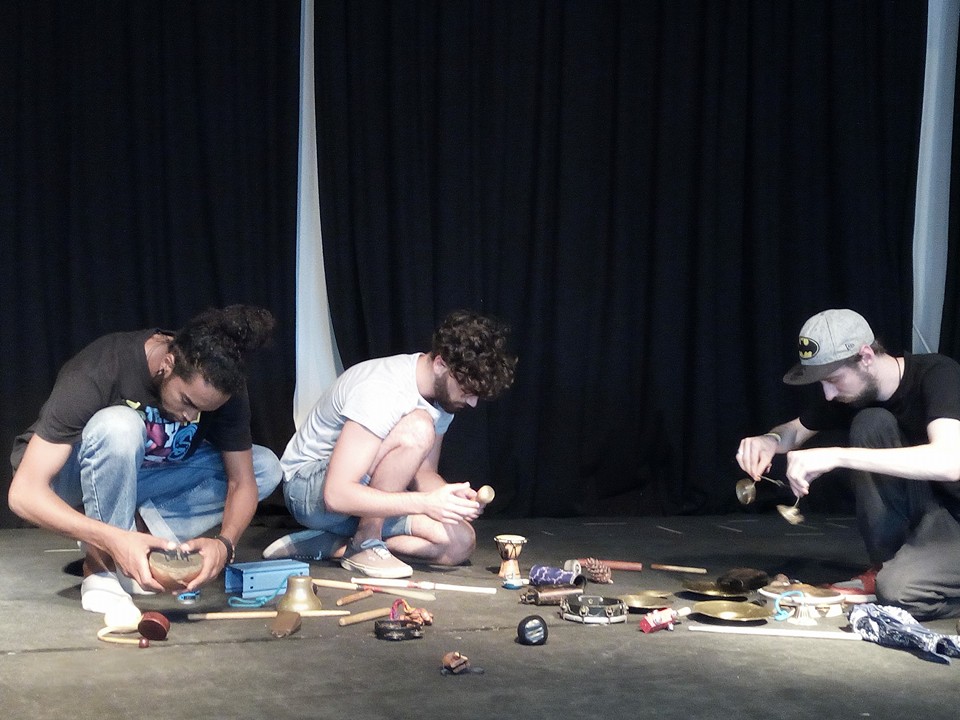 From the very beginning we understood that it would represent an unconventional and strong experience. Instead of the common ice-breaker exercises, participants turned out to gaze into each others’ eyes, two by two, without saying anything – and in one second the wall that divided us from the others broke down. During the next days, we had the opportunity to introduce ourselves and our artistic skills, but at the same time cross-disciplinary group activities proposed by the coaches lead us to explore new horizons, and to work together in harmony. 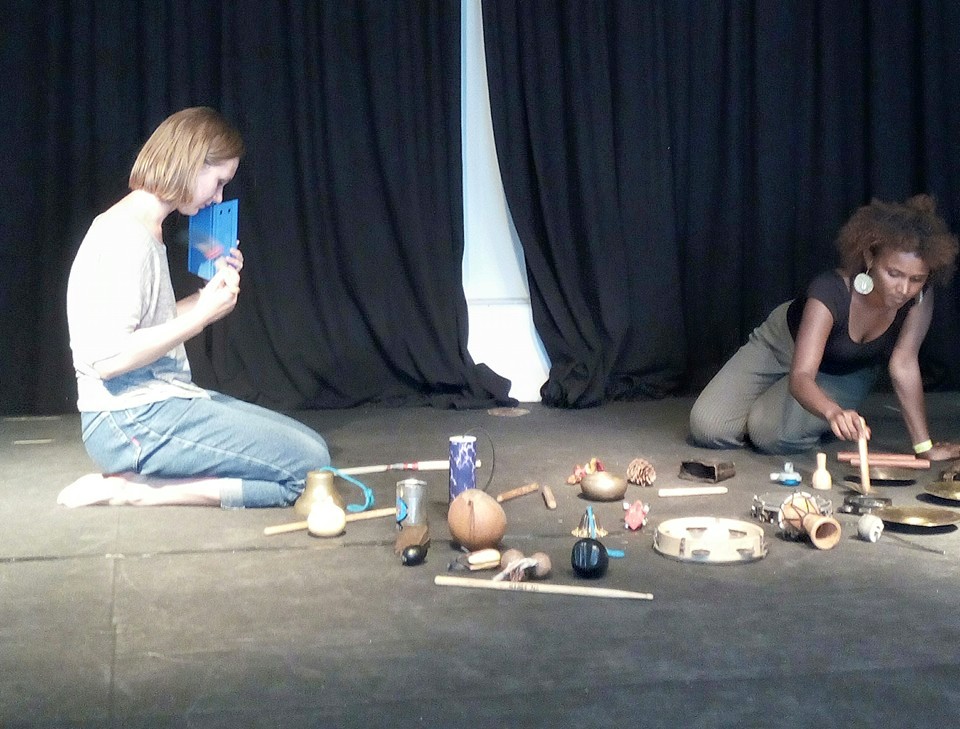 Our sensations, after these days, was that everybody could share and discuss on what we felt and what concerned us,       A M A Z I N G!!

The second international camp started in Florence on September 6th, 2016. 21 young people from Germany, Lithuania and Italy joined in at “Exfila connessioni metropolitane” for the second step of I-CARE – Inter-Culture Against Racism in Europe.

Everyone is happy! The scenes are complete and after some exhausting days the show is almost ready to be presented. We only need to work on some transitions and a few final details during this weekend. 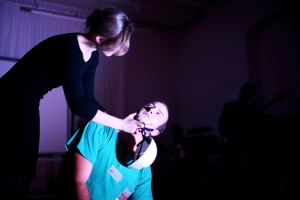 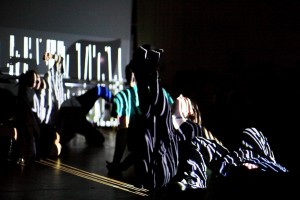 Tommorow (sunday) we’ll then drive to Cologne together. The theatre needs to be prepared for the upcoming two shows next week. 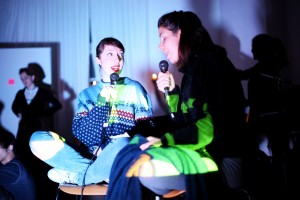 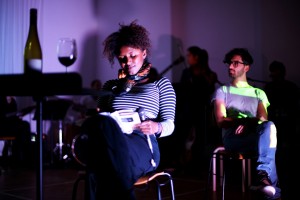 Many composed songs, poetic presentations, impressive dance moves – and all this framed by our versatile band and interactive visuals of the media group – can be experienced on the 19th and 20th of October at the Arcadas Theater. 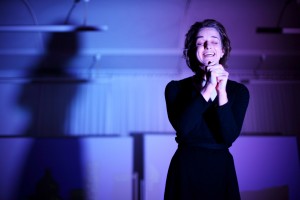 But now it’s also time to get some rest. The finishing line is close and the group needs to gain all energies for the last project days and the public presentation of „Roommates“. 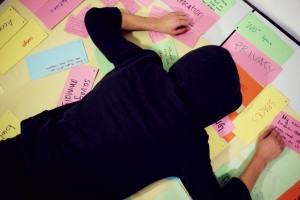